A couple months back near the beginning of the summer around mid May, there was this absurd incident in Portland where this kid allegedly urinated into an open reservoir destined for our taps.

This caused a panicked order by the city for residents to boil all water.  Well, it’s not that simple.  Even little things like a cup or two of urine in an ocean of fresh water will cause businesses to lose money and cost regular people like you and me both time and money.

Yes, the kid’s sentiment that it’s no big deal is technically correct… the concentration of dead birds is probably orders of magnitude higher than concentration of punk kid urine.  But, the consequences are that restaurants and grocery stores had to throw away tons of food – not because it was unsafe, but because this kid’s actions made us all freak out a bit.

In any case, when this happened, Asa and I had no idea when the boil order would be lifted, and we both love drinking tap water.  SO, we went out and got a portable water purifier from REI for about $50.

The only thing REI had at the time was the classic.  Before buying we did as much research as a few ours would allow.  Reading reviews on amazon, most of the negative reviews were about how the SteriPen would cut out before finishing.

Upon further inspection, we found an interesting note (and this applies to anything that runs on AA batteries): the SteriPen’s lamp (the uv light that does all the work) requires a certain nominal voltage to function properly.  In this case, what all the negative reviews look like is that they didn’t understand the different between Alkaline and Lithium Batteries.

Not All AA Batteries are Created Equal

Yes, they are both marketed as AA batteries.  Yes, they are the exact same form factor.  Yes, they both supply energy to drive our portable electronics.  No, they do not supply the same amount of energy while in use because completely different chemistries are used to generate this energy.

To being, all AA batteries are chemical batteries.  That means they use a chemical reaction to generate current.  When batteries die or get weak, what you are seeing is the Chemical Reaction fizzing out.  Alkaline batteries typically use something like Zinc and Magnesium Oxide.  Lithium batteries run on, you guessed it, Lithium.

Because these are different chemical reactions that produce different amounts of energy, Alkalines will typically put out 1.5 Volts, while Lithium batteries will put out around 1.75V.

So everything should be all right in the world of electronics, right?  Wrong.  Even though Lithium batteries are rated for 1.75V, there’s more to the story than that.  One thing that alkaline batteries do better than NiMH and Lithium is that their power output is linear.

Every battery, as more of the reagent in the battery react, will experience what is known as “Voltage Drop.”  That means that as you keep using the battery, that 1.5V will drop to 1.4V, then to 1.3V, then to 1.2V, and eventually, it’ll dip below.  Once it gets to low, electronics start behaving erratically and in unexpected ways… such as randomly turning on and off.  Sound like one the complaints about the pen?

Taking a look at the graph above, you’ll notice that while an Alkaline’s voltage drop is gradual and smooth, NiMH/NiCd (and Lithium Ion as well) drops suddenly near the end.

It’s that sudden drop that creates the lamp dying issue.

In any case, that was enough for us to know that the negative reviews were more user error.  So we biked out to the closest REI (in NW) and picked up one.

We put in Alkalines, and the thing works beautifully.

Inside the box, you get a variety of things… an instruction manual, a water bottle adaptor, the pen itself, and a handy carrying case.

Don’t have a photo of the case, but here are some detailed photos of the SteriPen itself: 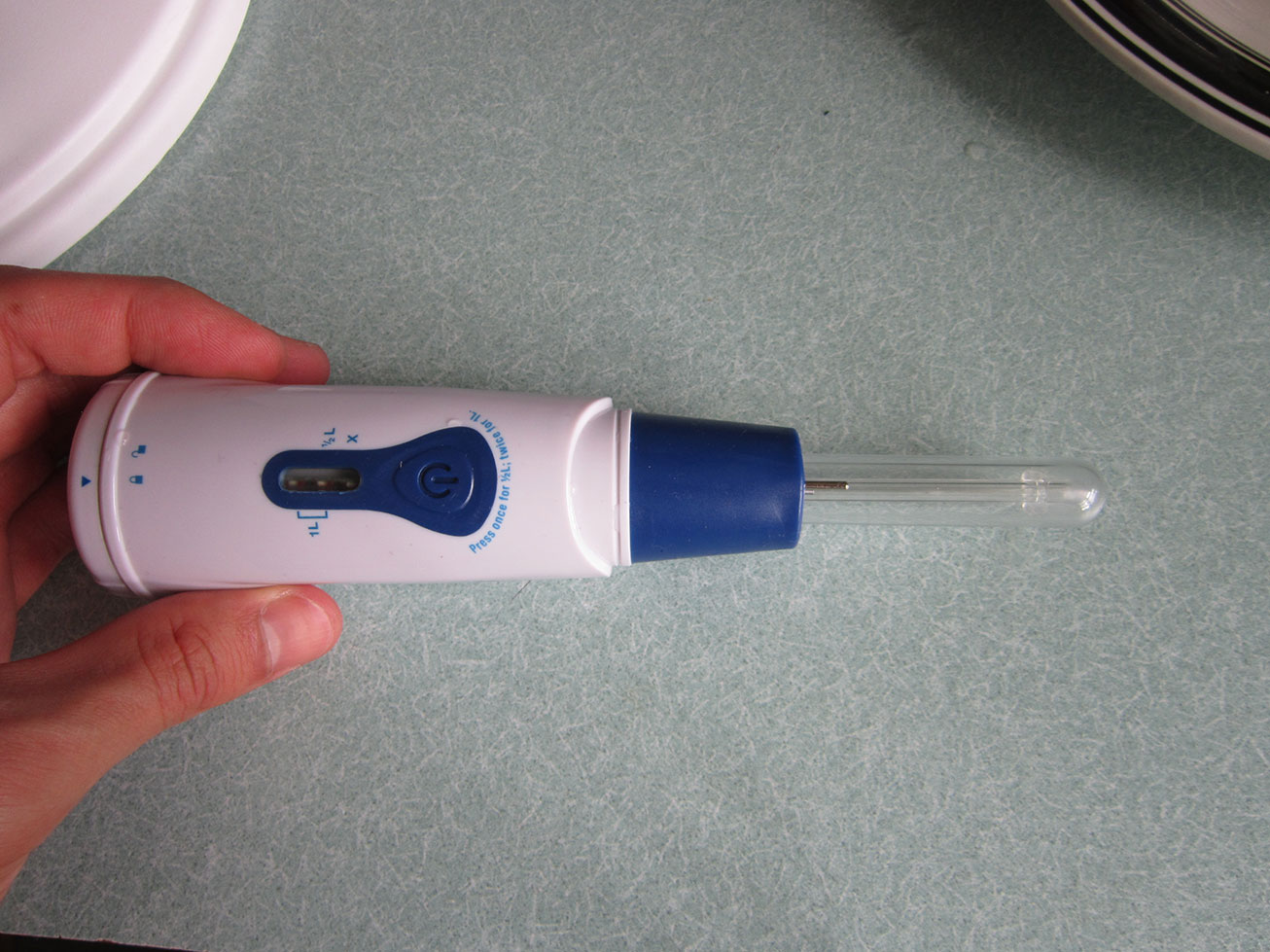 The interface is fairly simple, it’s got 3 diagnostic and status LEDs, a big On button, and a mechanical latch on the bottom end (triangle indicates lock or not locked). 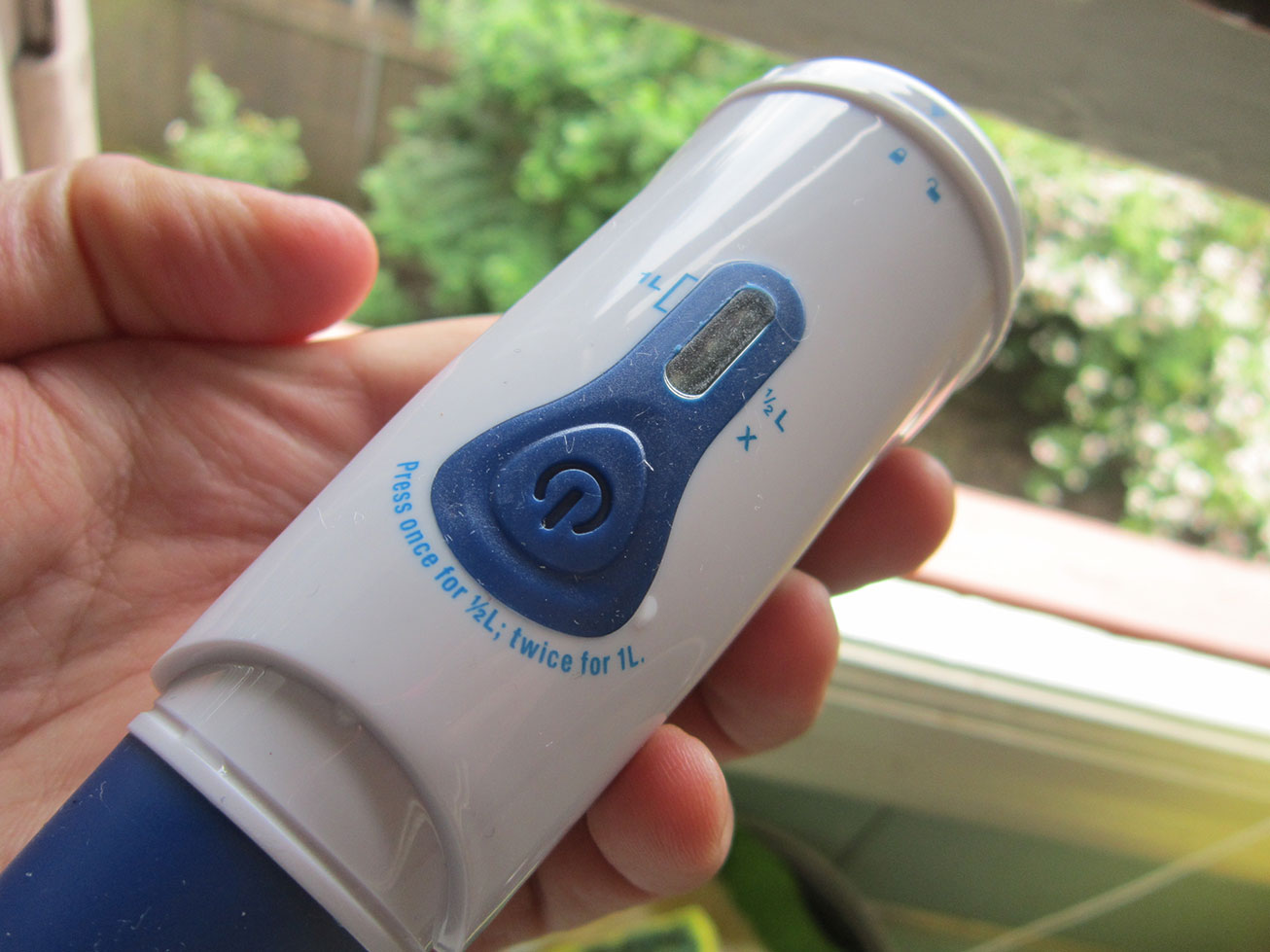 Close up view of the interface.  The trick here is that when you turn it on, a single push on the on button puts in 1/2 L mode, and two quick pushes turns it on in 1L mode.

There are 3 LEDs.  The top 2 indicate if it’s in .5 or 1L mode, and the bottom LED is the “An Unknown Error Has Occurred, try again later” LED.

Here’s a detailed shot of the UV Lamp that does the purifying.  Notice the two metal prongs which serve as the water level detector.  If these two prongs are at any time removed out of the water, the SteriPen will flash its red LED at you and you’ll have to start over.

So try to keep the black in the water and you’ll be fine.

So you turn it on, and then slowly stir your water with it for about a minute.  It’s actually really straight forward and I won’t waste any time describing the action of stirring water.

When it’s done, the LED’s go green, and then you drink the water.  Tastes great! 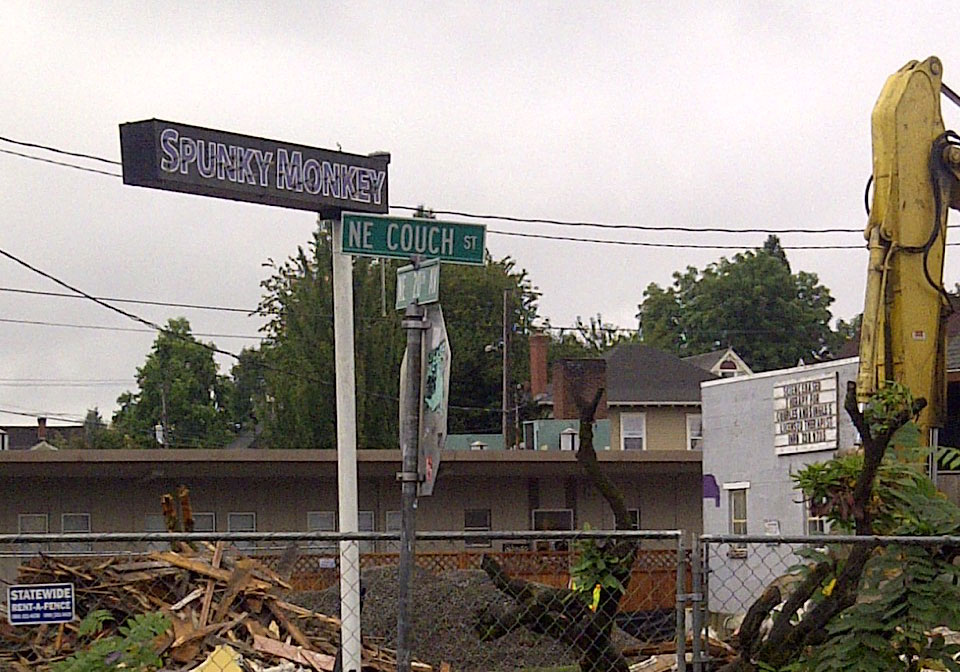 Portland has been going through a bit of a construction boom as of late.  Old neighborhoods are being torn down to make way for new apartments and supermarkets. Mom and